Our bags are packed and we’re ready to fly home today. As this trip comes to an end, and another trip is in the planning stages, we will continue to tell tales from the road. So stay tuned…

Here is a short video showcasing some of the things we encountered during our travels in South America. Without cheating, can anyone name what 80’s movie this song is from? If you enjoyed this video please share it on your feed. Thanks everyone for following…

It was three in the morning as I sat naked, confused, disoriented, and a bit groggy from the drinks of the evening. I was sitting in the reclined driver seat of my truck in a major city in South America, downtown, in an upscale neighborhood.

It started as a travel day like any other, moving from one place to the next, just like we’ve been doing for the past fourteen months. We spent the past two nights camped at “The Point” of Punta Del Diablo on the Northern coast of Uruguay. We shot up to the border town in Brazil to fill up with gas and load up on some tax free goods. The skies were clear, the color of the ocean resembled chocolate, the wind was howling through a windowless structure. Its was a weekday, so the beaches were lonely. 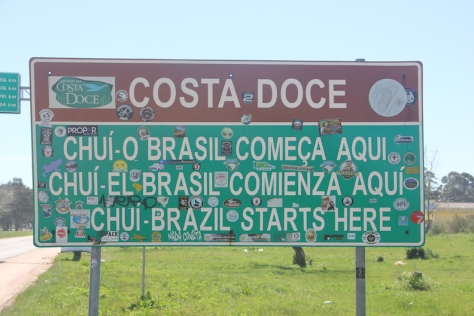 Hours were spent driving south down the coast, the landscape in Uruguay mostly rolling hills where cattle roam the fields waiting to be consumed by humans, the small crowds of tall trees growing close to one another in the wide open fields bearing resemblance to socially awkward teens in an auditorium at a junior high dance. The climate is not tropical, but palm trees grow wild. We would occasionally see small flocks of kermit-green birds spastically flying in close proximity to our faces. We watched for whales while surfing, the occasional startle from a curious seal as it popped its head out of the water only a few feet from where we floated. 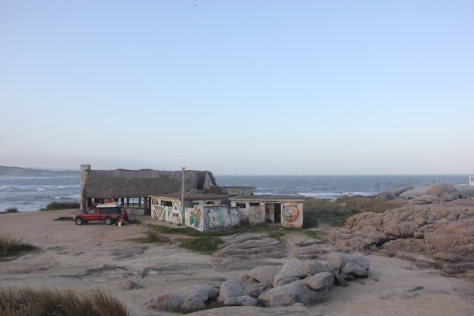 Then there was the drive through upscale Maldonado and Punta Del Este, the bright white skyscrapers contrasted against the blue sky. The sea was choppy and wind blown, so surfing was out of the agenda. There was a certain comfort provided by the upscale communities we had traveled through. The surroundings felt safe, the off season kept the crowds in check, and well groomed beach combers wished us well. This was all too easy, but the entire day still lay ahead. So we decided to go to Montevideo, the largest city in the country.

Navigating large foreign cities in the truck is not our strong point. On any given day we would drive into a big sprawl, I would get an anxiety attack, and we would quickly drive out. But Montevideo was clean, organized with courteous drivers steering through the streets while locals exercised up and down the malecón. The clean city beaches below the high-rises, were separated by well-manicured lawns littered with mate sipping bystanders. Although we were in South America, it felt more like Europe. 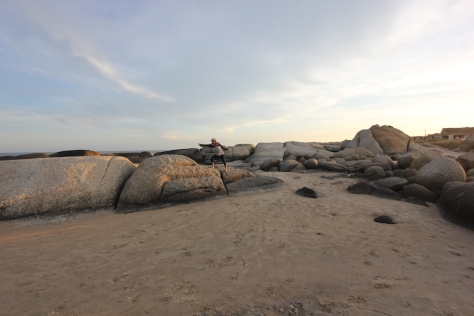 Camping in urban areas where we come from is often referred to as “homeless.” Our roof top tent attracts unwanted attention and firing up exotic curry dishes in the rear of the Toyota also attracts wandering eyes. Sometimes I wish we had a van. 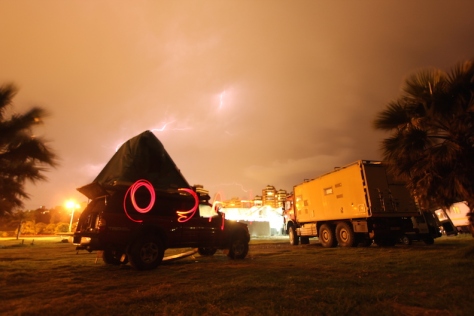 We found a spot to camp amongst other overland vehicles, sandwiched between a gas station and the Atlantic Ocean. The situation was suspiciously perfect. The gas station provided bathrooms and free wifi. The green grassy field we parked in had other overlanders (safety in numbers) and a horizontal view of the Atlantic lightning storm which we would later find out, would unexpectedly changed our night’s plans.

The wind was strong all day, but the rain came around midnight, soaking the tent and shaking the truck violently. It was about 2am when the wind clocked in at over 30 mph, the roof top tent resembling a giant clam shell closing down on us while we helplessly tried to sleep inside. At this point Sara feared for her safety and retreated to the cab of the truck, pleading for us to join her. Lupe and I stayed in the tent giving in to the comfort of warm wet blankets and a half drunken slumber. The tent was on the cusp of eating us alive and then blowing away in the night sea.

Rational thinking finally kicked in, the tent was on the verge of explosion, we needed to get the hell out, and quickly. I cradled the dog and exited the tent, instantly soaked we entered the truck and hatched a quick scheme. Wearing only a bathing suit and a rain coat, blinded by wind and rain, shivering cold, Sara and I struggled to break camp while Lupe laid comfortably on her bed in the cab of the truck. It was 2:30 am, the truck was now running, the streets were flooded, the downpour was torrential. Police barricades blocked flooded streets and we noticed were the only ones out in the city of 1.5 million people.

We retreated deep into the city streets, wind blocked by apartment buildings, rain intercepted by tree. It was still uncomfortable, but compared to where we came from it was a better situation. We striped off our wet cloths, tired and disoriented, this was where the story began. How long could we sit here in the truck, naked, drying off, in an upscale neighborhood, and not get arrested. The storm was bad, no one was around so we had the night to ourselves. We re-setup the tent, laid in wet blankets in the soaked clamshell of a tent and surprisingly, we slept the rest of the early morning in downtown Montevideo.

Waking up to the light of day, we climbed down the ladder from the roof of our truck, in a neighborhood where respectable citizens were on their way to work. They give us the “button eye” while they briskly walked past. I didn’t blame them, we looked pathetic. Then driving through the city we spotted the golden arches. There is no better place for a couple of pathetic Americans than a McDonalds. Americans seem to be the only people who travel thousands of miles to eat the same hormone injected protein we could get in our local shopping mall parking lots back home. We try not to make this a habit, but free internet, clean bathrooms, and hot coffee was hard to resist after a tiring night exposed to the elements. 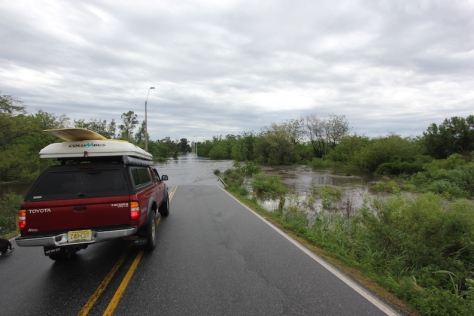 It looked like rain for the rest of the day in the entire country. All hopes of exploring the city were denied, everything was shut down. We were wet, everything was soaked, and we needed to find a room somewhere. So we headed towards the Argentinian border in hopes of crossing over within a few days. We drove towards Colonia, only a few hours away. The gasoline light illuminated; I had 30 miles left until empty but Colonia was only 10 miles away––no problem. Five miles from town, the traffic stopped. Then, cars ahead began to turn around. I was in desperate need of gas. I passed the line of traffic only to discover that the road had turned to a rapidly flowing river over 1/2 mile across. We headed back to where we came from, finding a gas station just as the last fumes were consumed by our engine.

The next several hours were spent exploring the surrounding area, where we searched for a safe route to Colonia, only to be disappointed with more flooded highways. There was no way in or out of Colonia by vehicle. So after more hours of driving we pulled into the riverside town of Mercedes. The river was swollen but the town sits safety on a hill, protected from the waterlogged river bank and flooded parks. The day ended and the sun sank on the horizon. The sky and buildings turned the color of salmon, a rainbow spanned the late afternoon sky. The worst was over, we could sense it in the air. As the last few raindrops fell from above, we sipped wine and looked out the window of our rented room. Exhausted and relieved, we embraced our hard earned relaxation, the wine too good to describe. Tomorrow would be another day, one of drying wet clothes and gear. Such is life on the road.