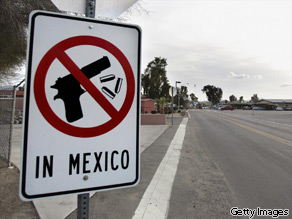 Just kidding, we are not bringing any guns anywhere ever, so let’s make that clear. A lot of people who hear about our trip insist we bring guns. The only thing that makes me more uncomfortable than guns are people with guns, with the exception of military and policia, but they make me nervous regardless. Could I really shoot someone if I had to? I would like to think so, but who the hell knows. Statistically the chances of us needing a gun are basically none.

According to the U.S. Consulate this is what will happen to you if you bring a gun into Mexico.

Don’t bring firearms or ammunition across the border into Mexico.
Don’t carry a knife, even a small pocketknife, on your person in Mexico.
You may become one of dozens of U.S. Citizens who are arrested each month for unintentionally violating Mexico’s strict weapons laws.

If you are caught with firearms or ammunition in Mexico…

If you carry a knife on your person in Mexico, even a pocketknife . . .

Claiming not to know about the law will not get you leniency from a police officer or the judicial system. Leave your firearms, ammunition, and knives at home. Don’t bring them into Mexico. 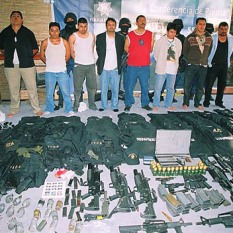 There you have it, and apparently you can’t have a pocket knife either. I’ve seen enough Locked Up Abroad episodes to know this is not something to take lightly. But if I did bring a gun into mexico it would probably look like this.

4 thoughts on “Should we bring a gun to Mexico?”